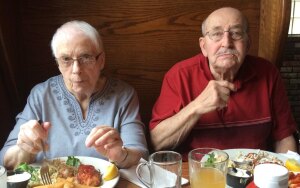 Charles Vincent Kase, 92, passed away peacefully with his family by his side on January 31st, 2021 at his residence in Mentor. He was born October 22nd, 1928 in Pennsylvania, the son of Ludwig and Margaret Kase.

Charles graduated high school in 1947 from Euclid Central High School. Shortly after graduating he joined the U.S. Army where he proudly served his country for two years, during the Korean War.

Charles married the love of his life, Shirley Davis on June 23rd, 1951.  Together they raised two wonderful children, Kenneth (Nancy) Kase and Deborah (Mike) Mac Naughton. Charles was a Firefighter for the city of Euclid for 29 years (1954-1983).  After retiring from the fire department, he went on to work in the Local 17 Iron Workers Union for 17 years then worked for 10 years in the maintenance department at St. Vincent's Charity Hospital in Cleveland.

Charles enjoyed spending time with his friends and family; one of his favorite places to travel was Disney World in Florida.  He spent many weekends attending his grandchildren's sporting events and always had his camera ready to capture the moments on film.

He is preceded in death by his parents: Ludwig and Margaret Kase

In keeping with Charles wishes, no public services will be held.

The Czup Funeral Home 1329 Lake Avenue, Ashtabula, Ohio will be handling all of the arrangements for the family.

At the families request please do not send flowers.

To send flowers to the family or plant a tree in memory of Charles Vincent Kase, please visit our floral store.

You can still show your support by sending flowers directly to the family, or by planting a memorial tree in the memory of Charles Vincent Kase
Share a memory
© 2021 Czup Funeral Home. All Rights Reserved. Funeral Home website by CFS & TA | Terms of Use | Privacy Policy