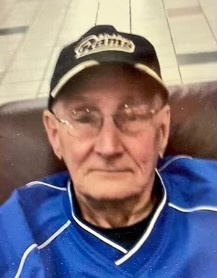 William graduated from Edgewood High School in 1949 and went on to proudly serve his country by enlisting in the United States Army.  William married the love of his life Rebecca J. Raisanen on June 10, 1967. William worked for Buckeye Local Schools for 44 years.

William had many interests and hobbies: he enjoyed golfing, the outdoors and meeting his buddies for coffee at the mall every day.  William's greatest joy is spending time with his family, he truly enjoyed being "Papa" to his wonderful grandchildren and always looked forward to going to their sporting events and school functions.  He was a member of Mother of Sorrows Church where he served as an usher and was also a member of the North End Club.

He is survived by his son, Eric (Nicole) Hodges, his grandchildren: Nicholas and Gabriella Hodges, and Christy (R.J. Detore) Tobias; his sister-in-law, Roberta (Steve) Carrick, as well as his niece and nephew: Karen Tremblay and John Tremblay.

William is preceded in death by his parents, his wife, Rebecca Hodges who passed away on July 3, 2011, his sister, Joyce Anne Tremblay and his son Bill Tobias in 2017.

Services will be held on Wednesday, October 6, 2021 at Czup Funeral Home 1329 Lake Road, Ashtabula, Ohio.  Calling hours from 4:00 p.m.6:00 p.m. with the funeral services starting at 6:00. p.m.  A private burial will take place on Thursday in Edgewood Cemetery with full Military Honors.

The Czup Funeral Home is honored to be handling the arrangements for the Hodges family.

To order memorial trees or send flowers to the family in memory of William "Bill" Hodges, please visit our flower store.