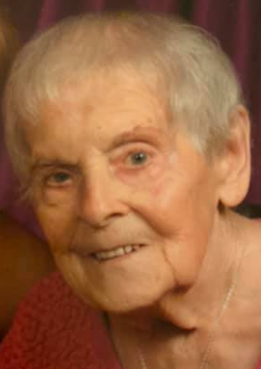 Sylvia Caroline Slaybaugh died peacefully in her sleep at home on Thursday, March 5, in Jefferson, Ohio at the age of 97. She was born December 11, 1922, in Ashtabula, Ohio to Harry Newstead Phelps and Abby Elizabeth (Stone) Phelps. Sylvia graduated from Jefferson High School and worked at the Jefferson GE plant where she met her first husband, Maurice E. Schrock. They were married on May 8, 1944 in Jefferson and had three children. Maurice & Sylvia lived in Eagleville until Maury passed in 1982.

Sylvia loved to read and write letters to family & friends. In the summer, one could find her gardening vegetables, fruit, or flowers, or canning. She was an excellent seamstress and shared her talents with others as a 4-H leader. Sylvia was also well known for her amazing apple pies and loved to teach anyone how to make a proper pie crust. With her wit & English sense of humor, she kept friends & family on their toes and enjoyed being in the company of others. Sylvia was a member of the Saybrook United Methodist Church.

Sylvia married her second husband, Alfred B. Slaybaugh on November 6, 1982 in Jefferson. They were married for 23 years until Al passed away. Al and Sylvia enjoyed traveling to various parts of the country and would snowbird in Florida during the winters.

Sylvia was preceded in death by her parents, her brothers Harry Jr, and Jimmy, first husband Maurice, and second husband, Alfred, and her son, Alan Slaybaugh. At her request there will be calling hours nor funeral. There will be a celebration of life luncheon at Saybrook United Methodist Church on Saturday, March 14 at noon. Memorial contributions may be made to Saybrook United Methodist Church for the elevator fund in Sylvia’s name. The family would like to thank Hospice of the Western Reserve and Ashtabula Regional Home Health employees for helping her daughter take such good care of her over the years.

To order memorial trees or send flowers to the family in memory of Sylvia Slaybaugh, please visit our flower store.