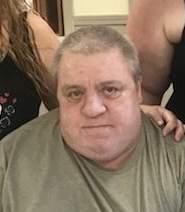 David Allen Tackett, passed away on August 4th, 2021 at his home in Ashtabula, Ohio.

He was born on September 2nd, 1961 in Conneaut, Ohio the son of Eddie and Kay (Getce) Tackett.

David enjoyed camping, fishing, playing video games with his grandchildren, being “grandpa” and playing poker with his brothers.

He is survived by his children: Ashley Smith and Kristen Tackett; his brothers: Eddie D. and Michael Tackett; his grandchildren: Chloe Noce and Matthew “MJ” Cope.

He is preceded in death by his parents, his brothers: Joe and Dale Tackett and his niece, Erica Tackett.

Czup Funeral home is honored to be handling the arrangements for the Tackett Family.

To order memorial trees or send flowers to the family in memory of David Tackett, please visit our flower store.